(The following is an anecdotal lesson on why it’s important to quickly adopt new Facebook ad features.)

Facebook is on a mission to address critical feedback regarding its advertising products. They’ve released a torrent of new features this year to aid marketers in accomplishing their goals. One of their largest initiatives has been the simplification and enhancement of their myriad ad formats. As detailed here on FBPPC, the culmination of this effort was the launch of new link posts for desktop newsfeed on September 10th. This release provides a number of enhancements:

1. Standardizes the image format for all newsfeed link ads to 560 x 292 pixels
2. Increases the visible area of images on link posts by 6x.
3. Unifies the display of link posts on the right column to match the creative specifications for domain ads

Prior to this release, many advertisers resorted to using photo posts with embedded short-urls in the caption to try to drive users off Facebook. The downside of this method is that many users click the photo instead of the short-url and are not taken off site. The new link post offers the best of both worlds: a large image that links off site.

It’s been a few weeks since the new format was released, and it’s become the standard ad unit for driving audiences off Facebook. At adMixt, we manage a number of clients sending traffic to their websites for e-commerce and lead-generation campaigns, all of which use link posts. On September 10th, we moved a portion of each campaigns over to the new formats and are now able to share some results.

The short answer is: the new format works better.  About 25% better. Comparing the performance of similar campaigns for the same advertisers, almost every metric improved by about 25%. Click-through rates went up. Costs-per-click went down. Overall costs-per-acquisition went down. Comparing the new link post with a photo post and short-url, we see a 25% improvement in return on ad spend.

But looking at performance over time, we see levels fall back to where they were prior to the release. The performance gains seen in the early days of the new post’s release gradually returned to normal. This is because Facebook’s marketing platform operates as an efficient marketplace. Whether you’re bidding on a CPC or CPM, prices are determined by the performance of an ad. The higher the click-through rate, the lower the cost per click Facebook charges. But as more advertisers come online with the new link post ad format, the competitive tides rise. Even though ads have higher click-through rates, so do competing ads, so click prices go back up.

As this is happening, we look at the user response to the new ad units and see a gradual decline in click-through rates. We can imagine why this happens. Users themselves operate something of an efficient marketplace for their own attention. When a new post type is released, especially one with a larger image, it garners increased engagement. But as users adapt to the new feature, and it becomes commonplace, performance returns to that of the older unit.

So why does this matter? New features arrive and offer an opportunity for a performance increase, only to blend back into normal performance trends.  The need to quickly embrace new features like these becomes clear when we look at the performance impact seen on campaigns left running legacy ad units. Like dinosaurs hit by meteors, performance plummeted compared to historical norms, and the performance of the newly evolved link posts. Cost per click increased by about 80%, and click-through rates decreased by 50%. After a few days of running this comparison, we pulled the trigger and moved 100% of our clients to the new link post format. 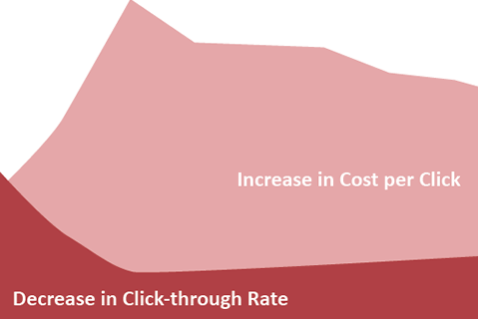 What we have here, more than an incentive to boost performance, is a cautionary tale of what happens when the latest features are not embraced. Whether we’re talking about organic or paid content distribution, Facebook’s algorithms reward the most engaging content and bury the least. So just as Facebook feels pressure to implement new features to improve their user experience and keep users engaged, so too must content creators and marketers compete against each other for their share of their customers’ attentions.