At adMixt, we’re always eager to test out new Facebook products designed to improve our clients’ campaign performance. This week, Facebook gave us a long-awaited feature: the ability to create Lookalike Audiences from dynamic sources. We got to work setting up some tests and can share some early results.

But first, let’s understand how the current Lookalike product works, and how the new Lookalikes are different. It was last March that Facebook introduced the first version of Lookalike Audiences, and the product hasn’t changed much since then. Users upload a list of customer data (email addresses or phone numbers), and Facebook matches that data to their user base. Those audiences can then be converted into Lookalike Audiences. That process generates a new audience of users that resemble the user’s original audience. The exact process is secret, but we can assume that Facebook analyzes a multitude of data points and ranks users based on similarity to trends identified in the source file.

This product works great and has been a staple of our campaign strategy since launch. But there were a few problems with it:

1. To generate the Lookalike, users had to upload their customer data. This means pulling data out of a CRM, logging into Facebook, and uploading the data.
2. Every time the customer data was updated, a new Lookalike Audience had to be generated
3. Every time a new Lookalike Audience was generated, new ads had to be configured to take advantage of the new data

Facebook went a long way towards addressing these issues later in the year when they made Lookalike Audiences update dynamically. Now, when users added customer data to an existing Custom Audience, the Lookalikes created from that audience updated automatically. This solved problems #2 and #3, but #1 still required users to upload their customer data.

This week’s release addresses that issue. Now users can generate Lookalike Audiences from a number of dynamic sources:

Each of these sources collect users dynamically as they interact with Facebook or with the advertiser’s website. For advertisers who have invested in growing an engaged following on their fan page, a Lookalike Audience could perform well for the purposes of fan acquisition, social engagement, or direct response. Generating lookalikes off Conversion Pixel or Website Custom Audience data has limitless possibility. Both of those sources are collecting groups of users who have performed key actions like checking out from an e-commerce website, or submitting a lead-generation form. With those users as the seed for the Lookalike, the resulting audience should be very similar to a Lookalike built from a traditional custom audience of past purchasers.

Let’s see how this new Lookalike product performs compared to the old one.

To test it, we created a Lookalike Audience from one of our client’s Offsite Conversion Pixels. We chose this method because we wanted to model past purchasers, and we have several months worth of data stored in our pixels and only a couple months of data in our Website Custom Audiences. The more data we start with, the more accurate the Lookalike model should be.

First let’s analyze our original Custom Audience we used for our seed.

This diagram shows the age and gender breakdown of the Custom Audience we use to generate our standard Lookalike. Obviously the product skews towards younger women.

This diagram illustrates the age and gender breakdown of the Lookalike Audience derived from the Custom Audience. We can see the same distribution, but with even more emphasis on women.

This last diagram shows the age and gender breakdown of the Lookalike Audience built from Facebook’s Offsite Conversion Pixel. It follows the same distribution, but is more balanced towards men, and skewing a bit younger.

1. The Offsite Conversion Pixel is updated in real time, and the client updates the Custom Audience file manually every few weeks.
2. Facebook controls how much data to use when analyzing the Offsite Conversion Pixel data. They could choose to exclude data that’s too old or falls outside other set criteria.
3. It’s possible that Facebook is only analyzing the users tracked by the pixel who were driven to the site by ads. If this is the case, then their model will be focused on people who are likely to click on Facebook ads. The Custom Audience file would include users who arrived from a variety of sources.

How did it perform? In short: very, very well. Compared to a similar campaign utilizing a traditional Lookalike Audience, the new Dynamic Lookalike audience saw a 19% reduction in Cost-Per-Acquisition. That huge performance improvement might decrease over time. It’s likely that we’re reaching a lot of new users with the new target. But whatever the reason, this new feature is helping us improve our client’s performance and raise our budgets profitably. 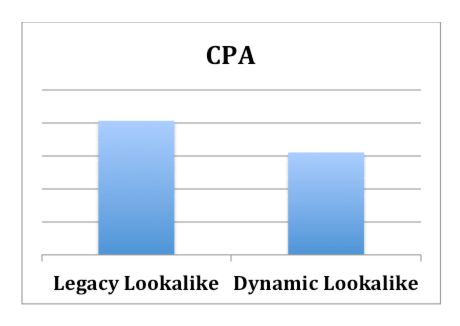 To test this theory, we compared the overlap between the Dynamic Lookalike Audience and our legacy Lookalike Audience. Each audience is about 2 million people, and they overlap about 40%. That means we have the potential to reach an additional 800,000 users who closely resemble past purchasers. 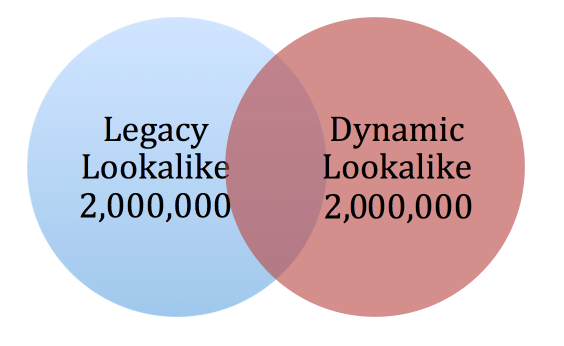 One nice feature of the legacy Lookalike product is that users from the seed Custom Audience are automatically excluded from the generated Lookalike Audience. That helps insure you’re reaching new potential customers. But with dynamic Lookalikes, the potential exists for existing customers to be included. In our test, we saw that about 50% of the past purchasers in our Custom Audience file were also in our Dynamic Lookalike Audience. 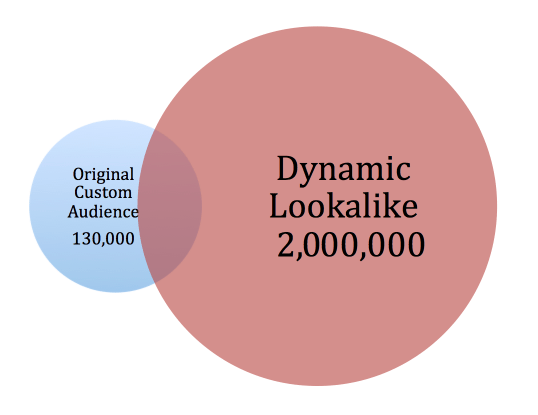 That’s a small percentage of the total Lookalike Audience, but it’s important to exclude them from our targets, since they’re targeted separately with their own campaigns. Leaving them included in both targets would increase our inventory costs and blur the lines between our prospecting and remarketing campaigns.

With this latest release, Facebook strengthens its arsenal of tools available to marketers and lowers the overhead required to keep audiences current. Custom Audiences are still important, especially for launching a brand new campaign, but moving forward, targeting will be dynamically configured based on user behavior.